Earlier I told you about one of the "phrases" magpies have taught us - the "J phrase", which your friendly magpie will use if (s)he wants you to follow him or her. Vicky Magpie used it to take us to her babies.

But what if your friend wants to point you in a certain direction, but does not want you to actually go there? That's what the "b phrase" is for. Your friend flies towards you, and then flies in a slow circle around and above you, like a letter "b": 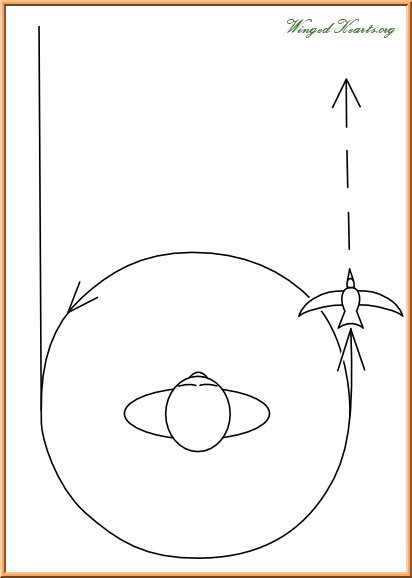 The closed loop of the "b" tells you not to follow, just as the open loop of the "J" tells you you should follow. Once again, the flight is slow, much slower than the normal purposeful flight of a magpie, and even less like the really fast turns of speed they are capable of doing. This seems to be a part of how they indicate that this is a message, not just somewhere they happen to want to fly.

We have seen this message less often than the J phrase. We first saw it done by Maggie's adopted sisters, Cindy and Tammie when they got their own territories down in the valley, and it was done by two of Maggie and Vicky's kids just before leaving home, once by Wendy and then by Sparky.

We were outside working in the yard one day, when we noticed that Sparky, now older than in the photo above and a beautiful black and white bird, was flying slowly around and around about our heads, looking at us. When we finally noticed her, she flew straight out across the valley to the hills at the farthest side. We had actually seen her the day before leaving in that direction with Maggie, so we knew that he was finding her a 'placement' over there so she could leave home. She returned the next morning, but within a few days she flew away across the valley and never returned.

‹ Communicating With Wild Birds up

The story of carbon dioxide, the essential life-giving gas that feeds all life. Contrary to everything we have been told, our planet is currently suffering a carbon famine, with deadly consequences for the poor and for wildlife.

This is the book every environmentalist and lover of wildlife really needs to read! (Click to read more.)

peacelegacy.org
A new way to work for peace